“…DIY punk can’t be fully captured, understood, or expressed by men. Diversity will only make us a better punk publication. Please help us out: razorcake.org/contact“

Daryl is the Managing Editor of Razorcake, the non-profit fanzine that is now in its 15th year. It’s kinda amazing to see how a passion project by a few core people, has grown after so many years into  a community oriented space for punk writers to share their experiences, and also a space inviting more and more people to consider themselves as part of that community.

The magazine is distributed throughout the US and roughly 20 other countries internationally. Each issue has a massive amount of content – hand drawn comics, long form articles and life stories from people across a spectrum of ages and experiences. Razorcake/Gorsky is the umbrella org that also produces podcasts and shows, and also is a book publisher. I got to see a Razorcake show while I was in LA, featuring ‘Pedal Strike,’ who did several sets to a packed crowd throughout the night and who were featured in the latest edition (Edition 96). 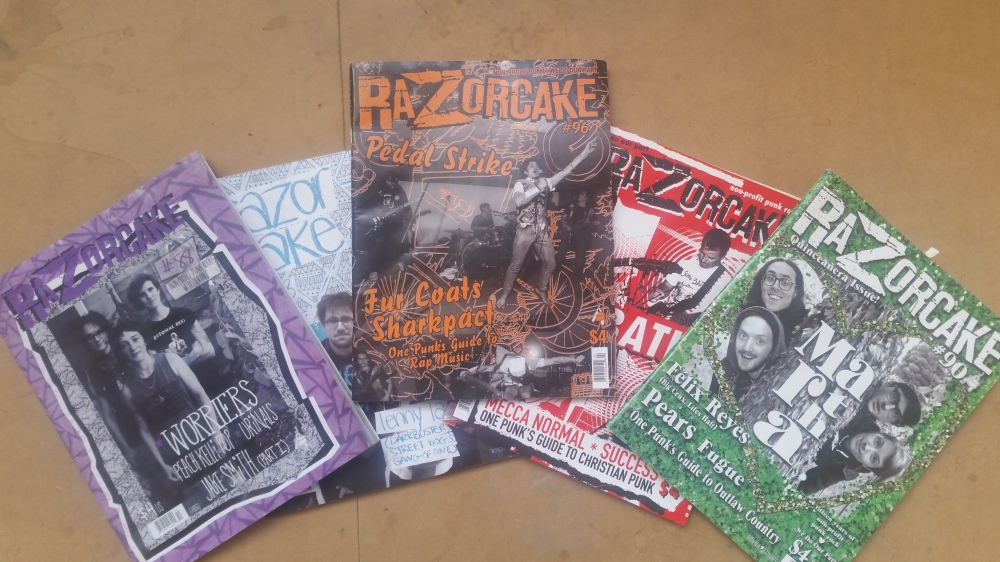 Razorcake, like much like the DIY punk endeavours it champions, is a labour of love and community building. What I really took away from my conversation with Daryl, is how the magazine is so intentional, even in such a ‘anarchic’ thing like punk, Razorcake is inviting misfits from all over the world to see themselves and one another. It gives me so much hope as an artist who constantly is being referenced to as “niche” – even in punk.   Razorcake shows how there’s other ways of still propelling the culture of risk even in a scene as established Los Angeles.

I got to chat with Daryl in the backyard of his home. We started with sunny California skies but it quickly got windy while thunderclouds were rolling in for one of the first storms in LA in a long long time. Find below both audio and transcripts from my conversation with Daryl. (Transcripts are being used when the audio is too distorted due to the sudden wind rolling in).

Daryl on what brought him to Razor Cake:

“I was actually, given a copy at a show by a band, where they had them on a merch table. And I was buying merch because I liked this band a lot, and he said- ‘here take a copy of this magazine.’ I said -nah, I’m alright.  And he said, ‘It’s free – why don’t you just take it?” So I took it. Because he shamed me into taking it. And then I just became a huge fan, and [Razorcake] were based out of Los Angeles and I would end up meeting [Razorcake] at shows and stuff. I wanted to help out, because I had always done zines, photocopy zines, and I wanted to know how they made something so big. I honestly wanted to know, how do you do this? How did you make this look like a real magazine? And now I know – and it’s a lot of work!”

Daryl on the explicit call for different genders to write for Razor Cake:

“We were looking at a pool of 40 different reviewers, and two of them aren’t male. And we were like – this is a problem. This is not equality. The call is on the second page of the magazine*….and that’s been really successful. I feel like this situation is improving. We could have put that announcement out one issue and gotten a couple of submissions, and gone back to just taking on more male writers, but by keeping with it, people are are realizing ‘oh, they’re really serious about this.’ And then they tell their friends and they tell their friends and then we get emails from people like “my friend said you’re looking for more female writers.” It’s a pretty slow process but it’s been paying off.” *and on the website razorcake.org

You can reach Razorcake at razorcake.org

You can reach Daryl at: razorcake@razorcake.org